The Chief Scientist meets with HE the Ambassador of Israel in Cyprus and the Cypriot delegation of the “Innovation Road Map” training program in Israel. 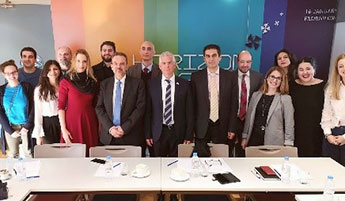 The Chief Scientist Mr Kyriacos Kokkinos meets at the Research Promotion Foundation with HE the Ambassador of Israel Mr Sammy Revel and the Cyprus delegation that participated in the “Innovation Road Map: How to Scale Up Your Start Up” training program in Israel, in December 2018.

The meeting was attended also by representatives from the Embassy of Israel in Cyprus, the Chairman of the National Board for Research and Innovation Prof. Philippos Patsalis, the Director General of the Research Promotion Foundation Vassilis Tsakalos, and other government officials.

The participants were excited to share their insights from their trip to Israel describing it as a “360o experience” of the Israeli research, innovation and entrepreneurship ecosystem.

The Cypriot delegation, which included representatives of Cypriot start-ups, accelerators, start-up funding entities, as well as representatives from the Research Promotion Foundation, along with a corresponding mission from Greece, were hosted for a total of 12 days by the Israel Ministry of Foreign Affairs and the MASHAV Organization, as part of the tripartite cooperation between the countries.