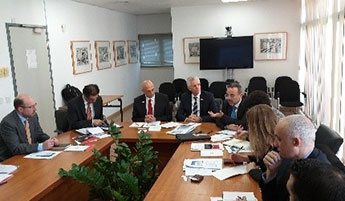 In view of the visit of Mr Aharon Aharon, CEO of the Israel Innovation Authority (IIA) in Cyprus, the Chief Scientist hosted a roundtable discussion on strengthening cooperation between Cyprus and Israel in the fields of research and innovation. The roundtable discussion was attended by representatives from relevant governmental departments, the IIA and the Embassy of Israel in Cyprus.

Actions discussed during the meeting included the update and broadening of scope of the existing strategic cooperation agreement between the two countries on applied research and development, the support of the implementation of joint projects in selected thematic areas and the enhancement of co-operation within the framework of European programs. Discussions, also, evolved around strengthening of co-operation between the two countries’ innovation ecosystems, with actions such as the exchange of visits and missions by the research and business community, training and coaching of Cypriot startups in Israel, and enhancing networking and partner-search facilities and tools. Finally, a cooperation protocol was signed during the meeting concerning the funding of a joint research project selected under the 2nd Call of the Programme for Bilateral Cooperation announced by the Research Promotion Foundation in May 18.

The two sides committed to finalizing the action plan and commissioning its implementation by the competent authorities within the following weeks.